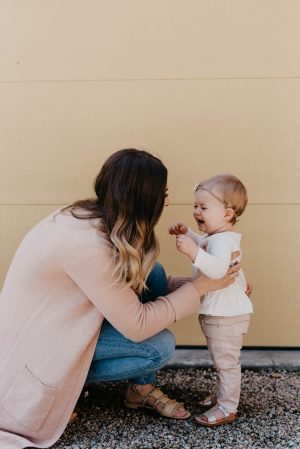 Every time I talk to a new mom and she tell me how difficult the newborn stage is, I always agree but quickly reassure her that it DOES get better.  Most people told me that after the first three months I would magically feel like “we made it.”  It wasn’t like that for me, though.  It took a lot longer for me to feel like it was starting to get easier.  I think it was around 7 months that I noticed I was starting to turn a corner and, honestly, not until she was almost a year that I could confidently say that I was really okay and felt like I knew what I was doing.  Since she was about a year, I’ve been really enjoying my role as a parent and I felt like Lily had really turned into a pretty easy kid.   That is, until the last two weeks.  Let me explain…

I’ve been told sometimes the “terrible twos” can come earlier than a child’s second birthday and boy oh boy were is that right.  I have been really conscious from the beginning that Andy and I need to be on the same page about discipline when the time came.  The one thing I’ve read over and over again is the key to making an impact in a child’s behavior is consistency.  Until recently, I really thought that Lily was just too young for any sort of discipline and honestly, she’s just been a pretty good kid lately.  It was all within the last month she’s started throwing things at us or the dog, having real tantrums and starting to deliberately hit me, especially while nursing.

We talked to our trusted psychologist about getting a game plan ready that Andy and I can follow together but the whole thing seems overwhelming.  It mostly involves time-outs and warnings with follow through but staying consistent with punishments seems daunting.  You have to change a lot of your daily routine to make sure you’re following through or else the punishments don’t work.  We’re working on finalizing a plan in writing that we (and our childcare) can follow, but her behavior is really getting out of control in the meantime.

Today I just lost it.  After her continuing to misbehave, I sat down with her to play and she tried to grab my phone.  When I said “no”, she slapped my phone and when I said “no” again, she slapped me!  I grabbed her arm, told her “no hitting” and had her sit down.  She proceeded to have a full-blown tantrum.  She was screaming so loud she could barely catch her breath.  I did the best I could to keep it together and to ignore the behavior until she stopped, but on the inside, all I could think was “oh my god, it’s happening again.”  I really thought the worst of the early parenting days were over.  Perhaps I’m being dramatic and forgetting how tough the first 6 months were, but I feel overwhelmed at the thought of going through these tantrums and fits every day for years potentially.   I think It’s especially heightened because I know Andy is about to start football season again.  That means 3 straight weeks of him sleeping an hour away from us and then a full season of him getting one day off a week and not coming home until 20 minutes before Lily’s bedtime.  I know I’m incredibly lucky to have our nanny four days a week from 9am to 1pm (or 3pm during training camp), but the thought of doing every weekend and all afternoon and night completely alone freaks me out.  I don’t want to get back to the place where I feel like I’m losing my mind because all I do is take care of her.

I suppose all I can do is start implementing the discipline techniques, stick to having a few hours a day during the week to work out and write and to try to remember that this is all part of a much bigger journey and these tougher times won’t last forever.  It’s amazing how these little beings can make us fall more in love every second yet make us more stressed and frustrated than anything else in the world.  I know I have so much to be grateful for and I don’t take for granted for one second that I have a healthy child, but I just don’t think anything prepares you for the roller coaster ride that is parenting.  If you’re reading this and you’re feeling the same way, just know that you are so not alone.  You don’t need to be on your knees in gratitude every second of every day because the truth is life, and parenting, is hard.  We deserve to honor our feelings no matter what they are (yes, even if you’re feeling like things are just plain shitty right now).  I’m here for you, mama.  If you ever need a shoulder to lean on or someplace to vent, you’ve found it.

What are your discipline secrets?  Did you find a plan that works for your child?  Would you mommies be interested in seeing my full “discipline plan” once it’s finished?  Let me know!