Hi, mamas!! Does it seem like my diaries are getting grimmer with every week?  It sure feels like it when I write them.  No matter how grateful I am to still be pregnant, the almost constant nausea is really wearing on me.  This week was the toughest one yet.  One of my biggest pregnancy fears happened, I got sick.  No, not a little cold sick, but tummy bug sick.  I’m still not sure if it was a virus or food poisoning but you guys, OMG.

I had already been having a tough week with nausea, tiredness, and stress with my dogs.   I have a feeling I may have been so worn down from stress that I was more susceptible to getting sick.  I had veggie sushi (avocado and sweet potato) the day before and a veggie burger from a local restaurant.  I have no idea which one of those could have caused me a problem, but it really may have just been a virus.  The next day started off with typical nausea but by lunchtime, I was doubling over in pain.  It felt like I swallowed a knife and it was going down my intestines on top of intense nausea.  I didn’t throw up at all but I SO badly wanted to.  I had a fever of 100.2. 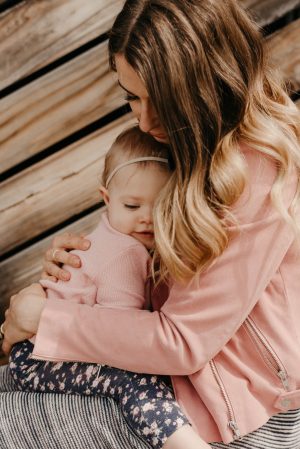 It was almost impossible for me to leave the couch and I didn’t want to eat anything, even though I felt like I was starving.  I survived on crackers, soup, ginger beer and bananas for almost 3 days.  I called my doctor the first day after I took a 2-hour nap and I was in more pain than I was before the nap.  He assured me that with no uterine cramping, bleeding or cold symptoms that it was likely a virus and wouldn’t harm the baby.  You know I was PANICKING about listeria.  But, the doc said I would have cold symptoms and a really high fever if that was it.  He told me that it was okay if I couldn’t eat and if my fever got to 101 or I felt dehydrated, I should go to the hospital.  I did feel dehydrated but I just tried to drink as much as I could.  I had never had a stomach bug or food poisoning last more than 24 hours, so the longer it went on I started panicking that it was something worse.

Luckily I never had any bleeding, cramping or a really high fever and on the third day, I finally started to feel a bit better.  Then…..it was back to pregnancy nausea as usual!   I have to say, I have to catch myself sometimes when I start complaining.  I really do feel so grateful that this baby seems to be hanging in there, especially after how anxious I have been about it.  But, that doesn’t mean the first trimester is all fun and celebrating.   This really has been a rough two months and I can only hope that I start to feel better soon.  Andy will be leaving for training camp in two weeks, which requires him to sleep an hour away for 3 weeks.  I have my childcare 4 days a week for a few hours but I am already panicking.  What if the nausea doesn’t go away and I have to care for Lily alone when I can barely take care of myself and this growing baby.  I don’t have a lot of friends in Atlanta, especially ones I can call to ask to pop in to help me.  I promised myself that I wouldn’t be any less of a mom to the rest of my kids, just because I had done this before.  A healthy baby requires a healthy, rested mom and I just want to give him or her the beginning he or she deserves.    I know SO many mothers have to do this alone with NO help and we all find a way to make it work, but I really want to be able to take care of both of my children with everything I have.

Anyway, one week left of my first trimester!  Hopefully everything will start to get easier in time.