Hi mommies, welcome to week 17!  This one has really been a doozy.

For those of you that don’t know much about the NFL, most players don’t “live” in the city that they play in.  Technically, we live in Santa Cruz, California but we spend our seasons (which are the majority of the year) in whatever city Andy is playing in.  While we’re in Atlanta, we have a rental house so we can easily move when his contract is over, which is the end of this year.  Anyway, I explained that because living in rental houses can be a real a pain in the butt sometimes.  Our house doesn’t feel like a home.  We have cheap temporary furniture, no dining table, no coffee table and never enough utensils or cooking equipment.  When I was pregnant with Lily, we had just moved into a 2-story townhouse/apartment. The day after we moved in, we left for a month to go back to California.  When we got back to Atlanta, we walked into the kitchen and saw a hole in the kitchen sealing covered in mold (we later found out it was an AC leak).  I was 4 months pregnant with Lily and my doctor told me I couldn’t stay in the apartment with the mold.  Andy was leaving for training camp 2 days later, so I was alone and pregnant with 2 aggressive dogs in a hotel trying to find a new place to live. The stress was unbelievable. 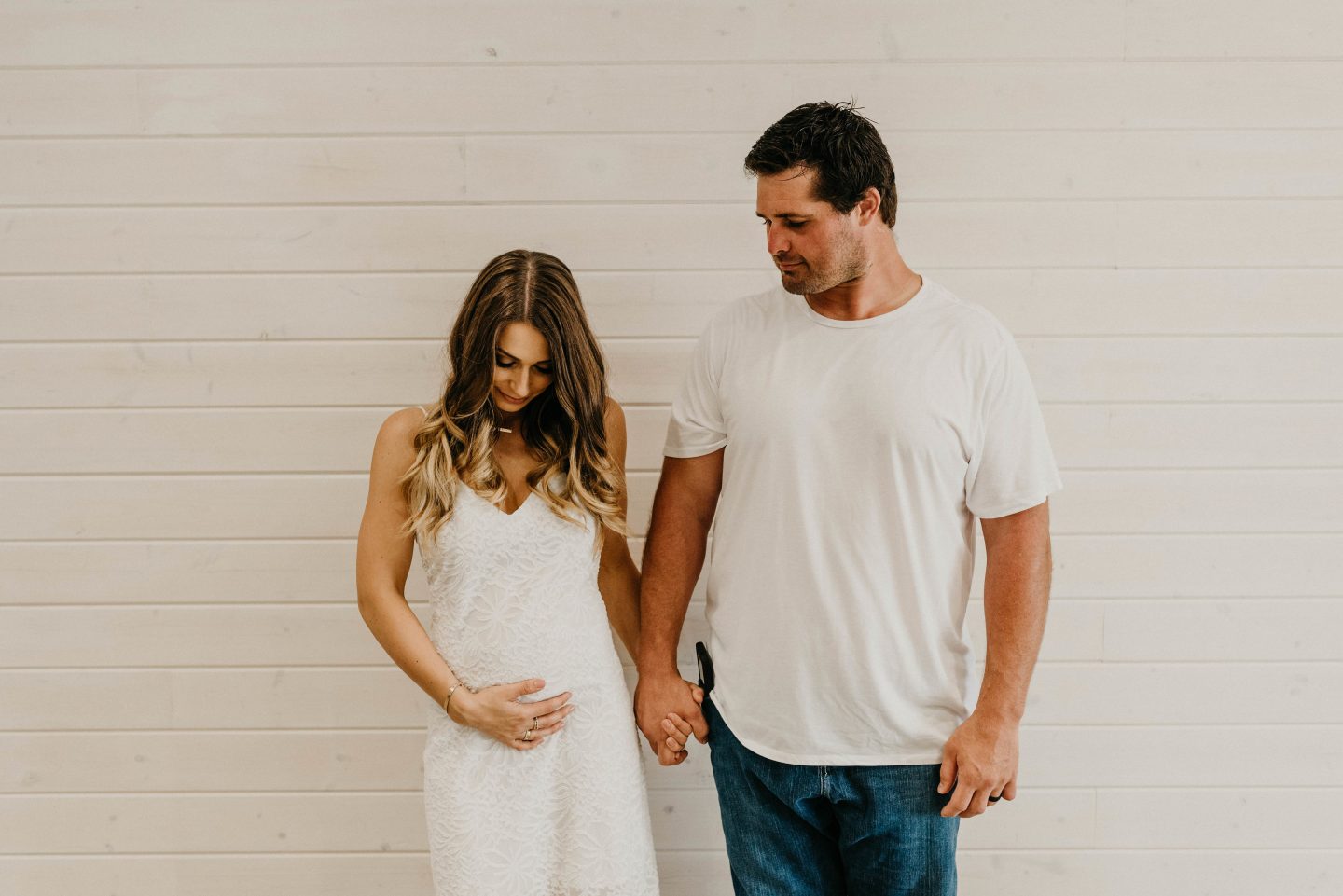 Well, guess what? At the end of last week, I tore apart Lily’s whole play area and put in an adorable little toddler kitchen and new toy storage bins.  The next morning, my cleaning lady was pulling up Lily’s play mat to clean under it and found a huge wet spot in the floor covered in mold that WREAKED. I seriously couldn’t believe it. Here I am, 4 months pregnant AGAIN with mold exposed in my house.  This time, I just covered it back up in plastic and asked my landlord to get on fixing it ASAP.  So far, we’ve been able to clear up the mold and fix where the water was coming into the house.  The day that they pulled up the floor Andy, Lily and I ALL got sick.  We’ve been coughing the entire week and feeling awful. Luckily my doctor told me that it would be super rare for any of the ill effects of mold exposure to cross the placenta and harm the baby.  But now, I have a hole in the floor right in the middle of her play area which means the whole floor is going to need to be replaced.  This is the type of stuff that gives me MAJOR anxiety.  I’m always worried that an old house we haven’t had inspected ourselves may have more going on than we think.  For the last several months we’ve been living there, Andy and I wake up in the morning and feel like we’re getting a cold.  Now I have the feeling that there are mold spores cycling through the vents.  SO gross. But the thought of leaving and having to babyproof another house, make the backyard dog-friendly & change our billing address for everything in the middle of Andy’s season while I’m pregnant and with a toddler seems insane.  I’m thinking maybe I can just deal with the floor being replaced & have someone else come to inspect the home we’re in to make sure nothing else needs immediate attention.  I encourage any other ladies who are living in old homes or rental properties to check their homes for anything out of the ordinary.  If you feel like something may not be right, trust your instincts and get it checked out!

Over a week later, I’m still coughing up a storm from the cold I got the day of the mold remediation. I traveled with Lily on Thursday back to my hometown of Buffalo, NY for one of my friends’ weddings.  We’ll be here for 10 days. Traveling alone with a toddler while pregnant is….interesting.  I’m an over-packer and trying to lift up my crazy heavy bags and push around all our stuff can be really exhausting!  Luckily, with the help of Mickey Mouse Clubhouse on an iPad, Lily has been doing much better on the flights.  I haven’t weaned Lily from her second nursing of the day yet, but I can tell my milk supply has dwindled SO much.  It feels like she’s barely getting anything out.  I’ve also been getting a lot of Braxton Hicks contractions.  It’s normal for them to start this early, which I didn’t realize. Last time I don’t think I felt them until near the end.  I had one night this week when I was up really late and they were coming constantly. The next afternoon after my workout it felt like my belly was achy and uncomfortable all night.  I’m going to keep an eye on it and call my doctor if it continues.  But, like all things in pregnancy, it’s probably “normal”!  I’ve been sleeping a little better at night actually.  Last night was the first time since I’ve been pregnant that I slept through the night without waking up to pee!  Success!

Are any of you at this stage of pregnancy?  Have you been having contractions or any other weird symptoms?