Breastfeeding has truly been one of the most difficult things I’ve ever done in my life.  I had NO idea how challenging feeding your child could be.  This natural ability wasn’t so natural to me.  In the beginning, I really didn’t believe I would make it past 6 weeks, even with my original goal being 6 months.  I had EXTREME oversupply issues.  When Lily wasn’t eating, I was pumping in small increments to just try relieving the engorgement.  The oversupply and fast milk ejection reflex made it almost impossible to feed Lily normally.  She would choke EVERY time she ate.  It was so bad that she actually turned blue in the hospital after she was born and needed immediate attention from the pediatrician.  I never thought we would ever make it here, almost 20 months later, still nursing.   I have no doubt that a big part of the reason I continued was due to my perfectionism, but I truly felt like it was the best thing I could do for her. It didn’t get easier until she was about 10 or 11 months but once we finally got there, it seemed selfish to stop. The CDC recommends that mothers breastfeed until 2 years, if possible.  It has certainly limited my freedom in so many ways, but if I am lucky enough to have this milk to give to her, I feel like I should.  Well, then along came baby boy. 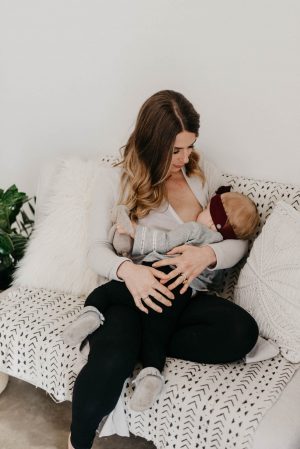 When we started trying for number two, I had no doubt I would continue breastfeeding while pregnant.  Once I actually got the positive pregnancy test, I had a little bit of hesitation about safety, but I had read enough to know it was fine in normal pregnancies.  My milk supply dropped initially but then actually went up.  She didn’t seem to mind, so I just kept going as usual.  I checked with my OBGYN and he was supportive as long as I was continuing to gain weight and didn’t feel any unusual cramping. Everything was going along fine until about 8 weeks.  I started to feel like I was getting a plugged duct.  I was using all of my usual remedies to relieve it and nothing was working.  I realized it wasn’t going away and I was actually starting to feel pain in both breasts, especially the nipples.  I totally forgot about how painfully sensitive my nipples were the first time I was pregnant.  I remember I would beg Andy to give me (non-sexual) boob massages because they were SO sore.  Just feeling my nipples rub up against clothes would make me cringe.  I did some reading online and realized that breastfeeding while pregnant can be REALLY painful.  I started to realize that it hadn’t been a plugged duct at all, in fact, it was my new normal. If I only knew how much worse it would get.

As the weeks went on the pain became nearly unbearable.  The best way I can describe it would be like Lily was stabbing me with broken glass when she latched, followed by razor blades instead of milk coming through my nipples.  Remember that pain you felt the first couple of weeks of nursing? It’s worse than that.   Lily usually switches breasts after the letdown and the second breast is even worse.  I have to make an audible noise and curl my toes when she latches.  I had hopes that maybe it would get better but it absolutely has not.  The pain is truly unbelievable.  If that level of pain continued longer than the few minutes it does, I would absolutely say it is worse than labor.  Unfortunately, the pain is normal and there is not much you can do about it.  There are sites that say you can change positions but most just say “try to think about something else.”  The pain is caused by the pregnancy hormones and the lowering of your milk supply.  I noticed that our third feeding of the day was the most painful, likely because I had the least amount of milk by that feed.

Two weeks ago, I finally decided to start cutting out the third/last feeding of the day.  It only took about 5 days.  She did well with it and as long as she gets frozen breast milk or almond milk in its place, she’s content.  I didn’t get overly emotional about it, it was actually nice to have Andy put her to bed some nights so I could make dinner or do some house chores.  I thought cutting out that feed would be enough to relieve some of the pain,  but I don’t think it was.  The second feeding of the day is still so, so terribly painful.  I can tell recently my milk supply has dropped even more (which is super common in the 4thand 5th  month of pregnancy) and I think that is making the feeding even more painful.  I go back and forth over and over again whether I should cut this feed out, but after today’s brutal pain, I’ve decided it’s time.  Over the next week or two, I’m going to cut out her afternoon/2nd feed and stick to one big feeding in the morning.  I have the most milk right when I wake up, so I think this is the most beneficial for her anyway and the least painful for me.  I didn’t want to wean down to one feed this quickly, but I know that I for sure want her fully weaned before the baby comes.  I don’t want her to think that the baby caused her to not be able to nurse anymore.

I never knew where this breastfeeding journey would take me and I certainly never dreamed I would make it this far, but now that I’m here I don’t want it to end.  I love how healthy and strong she is and I love knowing that I have been a real part of that.  I’m glad that I don’t have to wean completely yet and at least I can hold onto that morning feed and know that she’s still getting those antibodies.  I have to remember that my body is going through A LOT right now, so I just need to do the best I can to take care of both of these little ones while being kind to myself.  I have ALWAYS put Lily (and this baby-to-be) ahead of myself, almost to a fault. I’m trying to grow as a mother and realize that my health and happiness are important too.  I hope I can continue to nurse for a few more months but if that ends up not working out, I will do my best to be gentle with myself.  I should be proud of how long I’ve been able to nurse instead of beating myself up about everything not being perfect.  Plus, not needing to be home the second she wakes up from her nap to breastfeed is going to be AMAZING!  Sweet freedom.  Well, kinda.

Just some notes about nursing while pregnant:

-It is widely believed in the medical community nursing while pregnant is safe as long as you are having a normal, healthy pregnancy

-You do have small uterine contractions while nursing but in a normal pregnancy they would not cause miscarriage, pre-term labor or harm to the fetus

-The level of oxytocin released while breastfeeding is not large enough to cause any problems.

-If you are bleeding during your pregnancy or are told to refrain from sex (which also causes small uterine contractions) you should talk to your doctor about whether it’s safe for you to nurse.

-The taste of your milk will change later in your pregnancy and that, coupled with the drop in your supply, may cause your baby to self-wean

-If your baby is still relying fully on breastmilk, talk to your doctor or IBCLC about what to do when your milk supply drops.

Did you breastfeed while you were pregnant?  Was your pain as severe as mine?  If you chose to wean once you got pregnant, tell me why!  Can’t wait to hear your stories…