Good News:  We saw a heartbeat!!!!  We had our first prenatal appointment this week at 6 weeks and 3 days (remember, I had to go earlier than the usual 8 weeks because I was leaving town).  We weren’t sure if I was going to be far enough along to see anything, but I was!  Our doctor said the baby’s heart rate was 130bpm which is a strong heart rate for this far along.  I asked him if he thought that meant we were “in the clear” and he said he is cautiously very optimistic!  Usually, he said, you start to worry if the heartbeat is visible but only at around 90bpm.  So, a strong heart rate gives us a TON of peace. 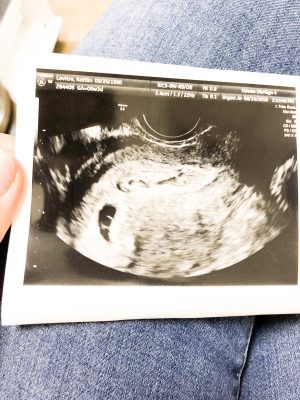 At the appointment we also talked about my concerns with working out.  The doc said that in almost every case of miscarriage, genetics are the issue.  He said if I’ve been running or lifting, to continue doing what I was doing while listening to my body.  If something doesn’t feel good one day, don’t do it.  If it feels okay, do it.  He did say he would recommend not getting totally breathless, but a hard workout is fine.  Since then I did one day of run intervals and felt fine!  I’ve also continued lifting just as hard (but not for as long) as I was before.  My core exercises have changed, not much twisting and no crunching or leg lifts!  I’m still doing some planks/plank variations.

I was assured that my cramping (as long as it isn’t accompanied by bleeding) is totally normal and just a sign of my uterus stretching.  He said it was okay that I wasn’t having many of the typical pregnancy symptoms  & that my insane hunger is very normal and I should eat whatever I need to feel full (ugh I don’t need someone telling me to eat MORE!!).  He did say that a lot of the symptoms are probably going to come roaring in soon…yaaaay (not).

Our other major topic for the appointment was that I’m still nursing Lily 3 times a day.  I told him I’m going out of town next weekend without Lily and will need to pump.  He said as long as I’m staying on the same schedule that she nurses on, I should be fine.  He did say that I may need to stop nursing if I am not gaining enough weight or if I seem to be having any complications.

The Bad News:  Here comes the nausea!   It isn’t terrible, but it’s one of those all day long, feel it in your throat type of things.  More obvious than the nausea is the beginning of food aversions.  UGH.  I had them my ENTIRE pregnancy with Lily.  I mean, I could look at a huge menu of food and only find one thing on it I could stomach.  They weren’t cravings, I just literally couldn’t stomach anything else.   I started feeling them hard the last couple days.  I’ve been signed up for a meal plan called Sakara for a few months and it is basically all vegetables.  I LOVE their food and this week I started gagging on the meals.  I promised myself this pregnancy would be different and that I was going to eat a ton of vegetables but what is a girl to do when you literally can’t stomach them?   So, I’ve had a few days of bad eating, but my plan is that no matter what I will find a way to get 6-8 cups of greens a day, whether I have to put them in a smoothie or hide them in a sauce.  We’ll see if that lasts!

I’m also noticing “pregnancy brain” big time and I’ve had a couple days of the hit-by-a-truck exhaustion.  Luckily, I’ve been able to keep going through the days and I even got 2 solid naps in this week (thanks, babe!).

We also decided to tell Andy’s dad, grandparents and ¾ of his brothers.  We were going out for Father’s Day brunch together & he wanted to get a chance to tell them in person since he may not be seeing them for a while.  Telling people this early makes me a little uncomfortable, but I’m telling my parent’s this week when they come to California, so it’s only fair he gets to tell some of his family.

Did you guys tell anyone before the first trimester?  Were they able to keep it a secret?  It sure is nice to have someone to talk to about it!