Let’s talk about baby bumps this week.   I heard that you start showing much earlier with your second pregnancy, but I had no idea HOW early.  With my last pregnancy, I was SO excited to start showing that I was taking photos every week and sending them to my parents asking if they could see a bump.  This pregnancy, because I worked so hard to get in shape prior to it (and had defined abs for the first time ever!) I’m not as excited to show early.  I’m not gonna lie, I got REALLY big with Lily.  I stopped checking the scale after like 38 pounds but I would say I probably gained 40-45lbs.  I lost most of the weight right after having her but over time a good chunk of it slipped back on.  I think I’m worried about falling down that rabbit hole again, so I was kind of hoping that I could keep my tummy tight a little longer. 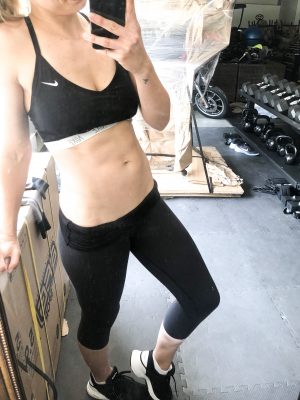 I started bloating basically the week I found out I was pregnant.  It was uncomfortable but totally not noticeable.  I figured I had about 12 weeks until I really started to pop, but by 8 ½ weeks, there was something visible there.  My lower pelvis has now solidly pushed past my hip bones.  I can still fit in low rise jeans but my higher waist jeans are too uncomfortable to button.  On some days the “bump” is bigger than others, but I think because it does come and go that it must be mostly bloating and hormones.  The other day I was going to meet Andy and his brother for lunch and I literally couldn’t find anything that looked normal.  My tummy was huge but too awkwardly shaped for anyone to know whether it was a baby or a burrito belly.   I don’t think that my eating habits are helping much, though.   The food aversions are making it hard to eat my usual 70% vegetable diet, but I’m hungry (for the wrong foods) all the time. It’s so funny how things change because I was the least insecure preggo last time around.  Now I want to keep my body for as long as I can!  I’m sure once the bump is actually prominent again, I’ll start loving it.

I think in the right clothes I can probably disguise it until the end of this trimester (2 weeks!) but after that, I think this lil babe is going to make her/himself known.  It’s another one of those motherhood things, I suppose, we sacrifice ourselves and our hard work to make sure our babies are okay.  I’m going to have to just take a breath and let my belly grow whenever it is ready.  I’m hoping once this second trimester hits, the food aversions will subside (they didn’t last time) and I can start eating a more balanced diet to avoid gaining too much weight this time around.  I’m making a commitment to myself to keep the gaining under 40 pounds.  A woman with a healthy weight pre-pregnancy should only gain 25-35 pounds, so I think 40 is a good number to stay under without too much pressure.

Other updates: the nausea and food aversions are still very much present.  It still usually kicks in during the late afternoon and lasts till almost bedtime.  I’ve been able to work out 5 days a week but haven’t been feeling it as much as I used to.  I run in intervals a few days a week but even that isn’t as comfortable as it used to be.  It feels like I have so much pressure in my lower pelvis every time I bounce up and down.  I’m really thinking I just need to get out of the early stages of pregnancy and hopefully I’ll start feeling better about everything!

See ya next week, mamas!