Well, that was fast!  After a long 10 months of trying to get pregnant with Lily, this little babe appeared on the very first try.  If I’m honest, my first reaction was “holy shit.”  Like, I truly could not believe it… I took 6 pregnancy tests in 3 days, ha!  The first two came up so faint I wasn’t sure whether it was a yes or no (of course, it was my fault for testing 2 days before my missed period).  I had no symptoms of being pregnant, I was just excited to test myself and when I watched those lines slowly appear, I couldn’t believe it.   After a bunch of online research and double checking via photo with my doula, I was (almost) convinced it was the real deal! 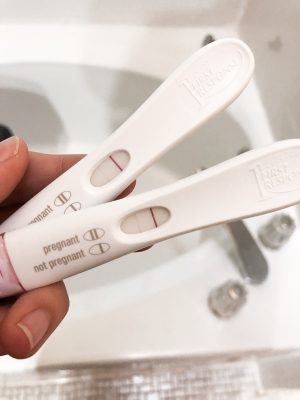 My first step was calling my new OBGYN to see if I could come in to get a blood test to confirm the pregnancy but, unfortunately, they don’t take newly pregnant patients until they’re 8 weeks along.  Andy was at work so I had to wait ALL day to tell him, it was torture!  I stopped at target and got him a little card that said “congratulations” and a gift bag to put the positive tests in.  Of course, as soon as he saw the bag he knew what was up.   He couldn’t believe it either but he certainly was proud of himself for getting the job done the first time!  We enjoyed our last bottle of wine and talked about how excited, nervous and in awe we were.

So, now the anxiety sets in.  I had the misfortune of miscarrying after trying for 6 months the first time around.  We were 6 1/2 weeks along the first time, which is early, but incredibly devastating none the less.  It was painful emotionally and physically and its left a real mark on my heart.  This time around we are trying to not get *too* attached to this pregnancy until we are able to see a heartbeat.  If you are healthy and having a normal pregnancy, your chance of miscarrying after seeing a heartbeat at 6 weeks is as low as 12% (I’ve even read 4% in other literature).  As I write this I am just thinking about my first OB appointment and wishing it was already here!  I’m going in earlier than normal at 6 weeks and 3 days, because we will be leaving right after for California for a month.  The doctor was nice enough to let me come in early so I can check the heartbeat before we leave.  Most of the time (fingers crossed) a heartbeat will be visible with a prenatal ultrasound by 6 weeks and 3 days.

Is it bad to tell you guys I’m already missing wine?  It’s only been 2 days.

Stay tuned for next week’s edition of “The Pregnancy Dairy!”